The new 3-Hirn-Grant for a doctorate in the field "Analysis and Programming of Games" has been awarded to an American .

* B.Sc. in Mathematics from Harvey Mudd College, Claremont (CA), 2002.
* M.Sc. in Engineering (major Computer Science) from the University of Pennsylvania (PA), 2004.
* Working at amazon.com from 2005 to 2010.
* In November 2011, Wesley's bot Sybil won the silver medal for "EinStein wurfelt nicht" in the Computer Olympiad. Currently (February 4, 2012), Sybil_c is ranked no. 1 in the Ewn rating list on games server www.littlegolem.net . 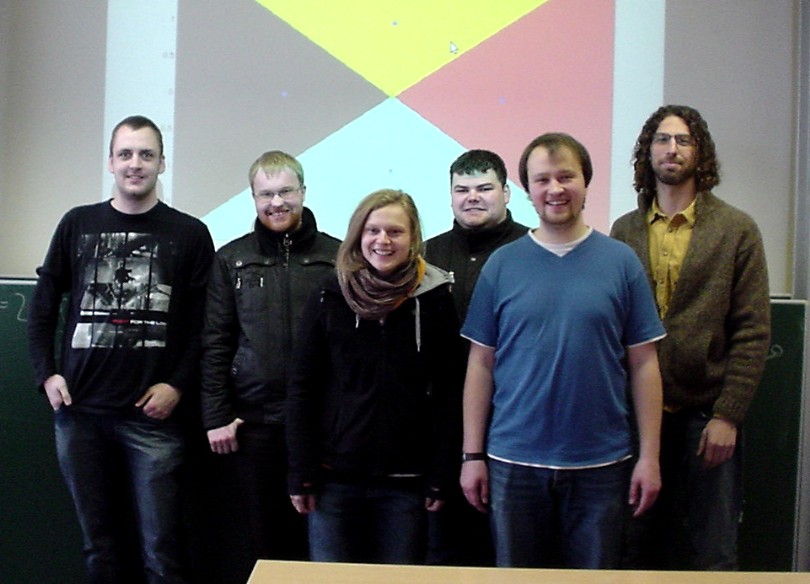 Wesley Turner on the right

The other students in the picture are, from left to right: Matthias Beckmann, Tim Lucke genannt Schönberg, Marlis Bärthel, Christopher Schneider (doctoral student of my colleague Walter Alt), Konrad Kaffka. Missing is the other recipient of a 3-Hirn grant, Nancy Kästner. She has become mother in December 2011.


The doctoral project of Mr. Turner, at the Chair of Prof. Dr. Ingo Althofer (FSU Jena, Faculty of Mathematics and Computer Science) has started in the last days of January 2012.

Amongst other topics, Wesley Turner will analyse the depth of games with random elements.