Most recent update from April 2019

Interactive (human + computer) game play has achieved impressive successes in the last few decades. In most "teams" the computers are used to generate sets of candidate moves and to present them in such a way that the human boss finds it easy to select his or her favorite move.

Several good screen layouts have been realized. See the examples below: first a series for Monte-Carlo game tree searches in Go, Hex, and Havannah; in the second part some k-best visualisations for alpha-beta search with iterative deepening. 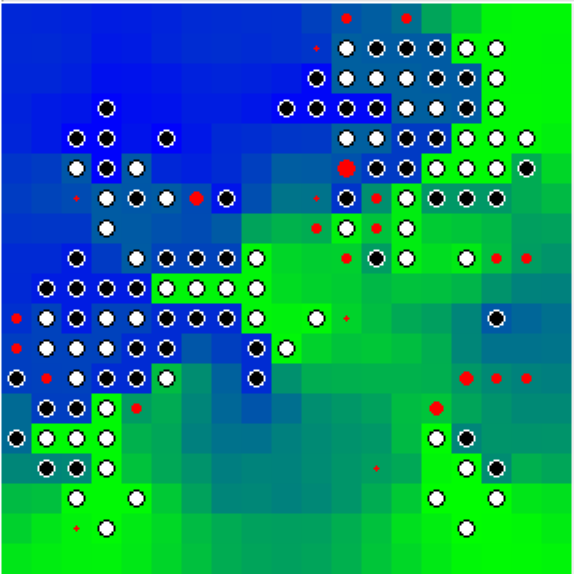 Valkyria is a private go program, authored by Magnus Persson. In October 2010, Persson designed a very informative visualisation of Valkyria's Monte Carlo search process: in one diagram he put the expected territory distribution (like in Fuego, see below) plus information how often each candidate move was visited in the process.

Concerning territory, green means ownership for White and blue for Black. Red circles of different sizes indicate the number of visits. The radii of circles are proportional to the ratio logarithm(visits) / logarithm(max-visits). Persson first used visits/max-visits but then only the moves searched a lot became visible. In the example, the largest circle is 1578 visits and the smallest is 9 visits. The medium sized are about 150-700 visits. In the position, Black is to move.

Persson did not include win rates in the diagram because win rates tend to be either unreliable (move was not searched much) and because all top candidates tend to have rather similar win rates. 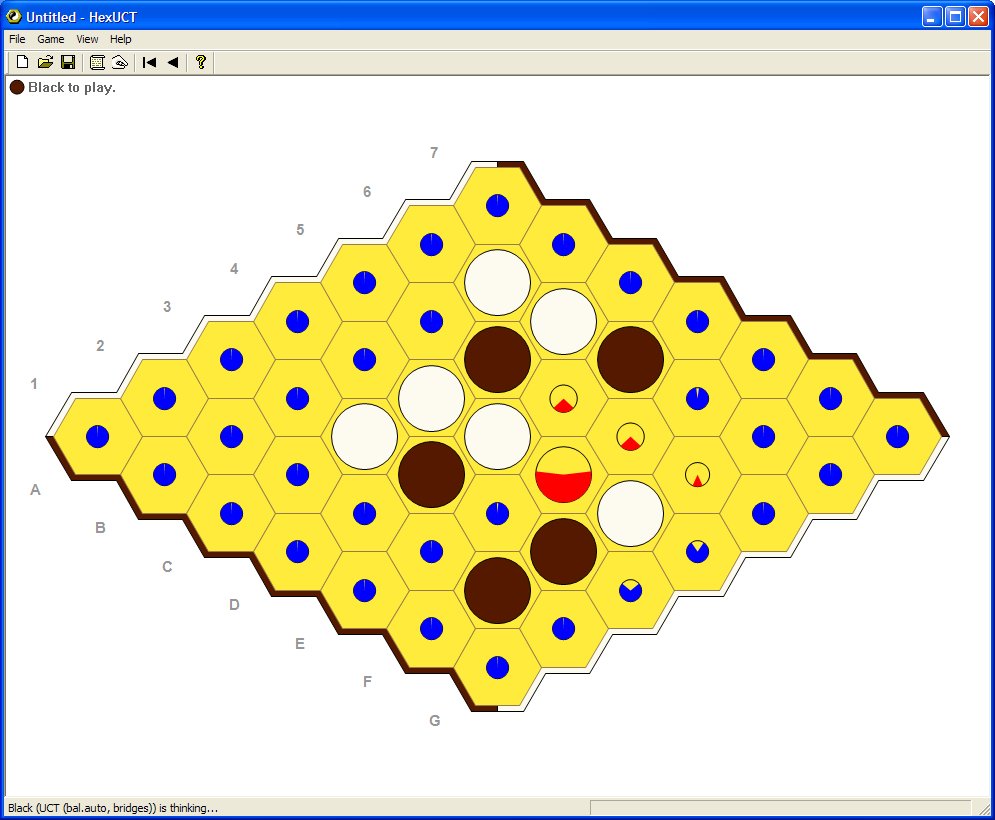 This picture belongs to a Hex program, based on UCT search (author Cameron Browne, Summer 2010). The screen shot shows the different aspects of the visualisation. There is one obviously good move (at square E4). The large circle there means that UCT has correctly focussed most of its search time on that cell. The fact that the big red pie slice covers more than 50% of the circle means that the algorithm is reasonably confident of this move (pie area is based on reward percentage).
The red pie slices are positive (winning) estimates and the blue pie slices are negative (losing) estimates, hence the algorithm is very confident that all but the four red moves are almost certainly losing moves. If the algorithm searched for longer on the cells with the three small red pie slices, the red slices would shrink then become blue as their true negative value is realised.
Circle radius is based on the number of times that each node (move) has been visited. This is an exponential scale, so that nodes visited only a few times have inflated radii and are still visible. As the number of visits to a node approaches 1,000,000 then its size will approach the standard piece size.

This way to visualize a UCT search may be applicable to many games (including Go) where a move consists of a piece being placed on a free cell of the board. 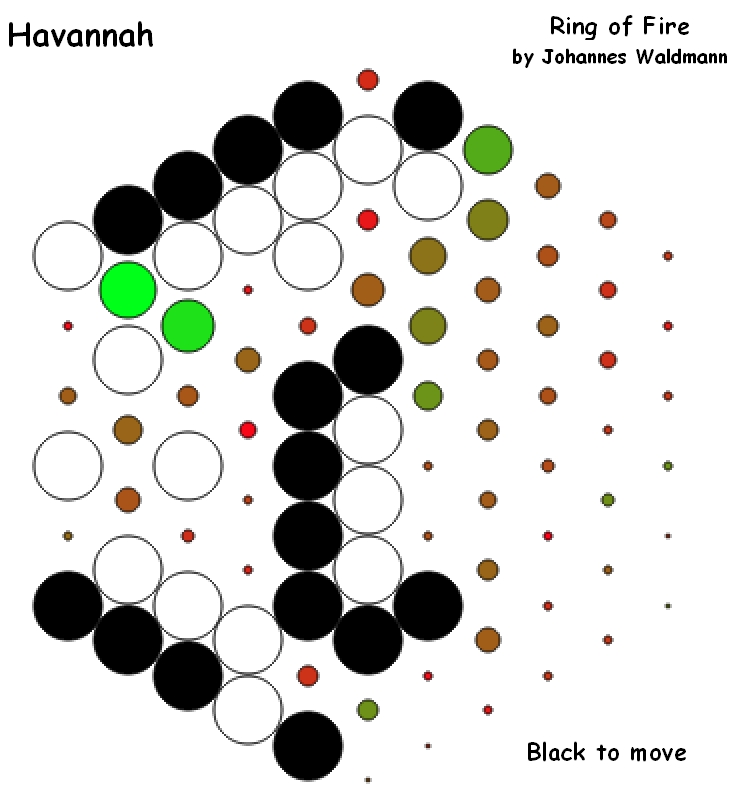 Ring of Fire was a program for the game Havannah. In October 2010, RoF-author Johannes Waldmann from Leipzig chose the following way (somewhat different from Cameron Browne's) to visualize the candidates of Monte-Carlo tree search:

The Havannah board is hexagonal, size 6 in this example. Black and White are stones, already placed by the two players. In the diagram Black is to move.

Candidate moves are shown by blobs with different colors (between green and red) and different sizes. The color of a blob is the move value (green = good, red = bad), and the size of a blob indicates the number of visits (large = many). Colors are normalized (the best value is always pure green, no matter how bad it actually is), and visit counts are logarithmic.

When Johannes Waldmann presented this solution in the Havannah/Hex forum of www.littlegolem.net, he gave a promise: "Yes, I will make the blobs click-able (to allow the user to walk in the search tree)." 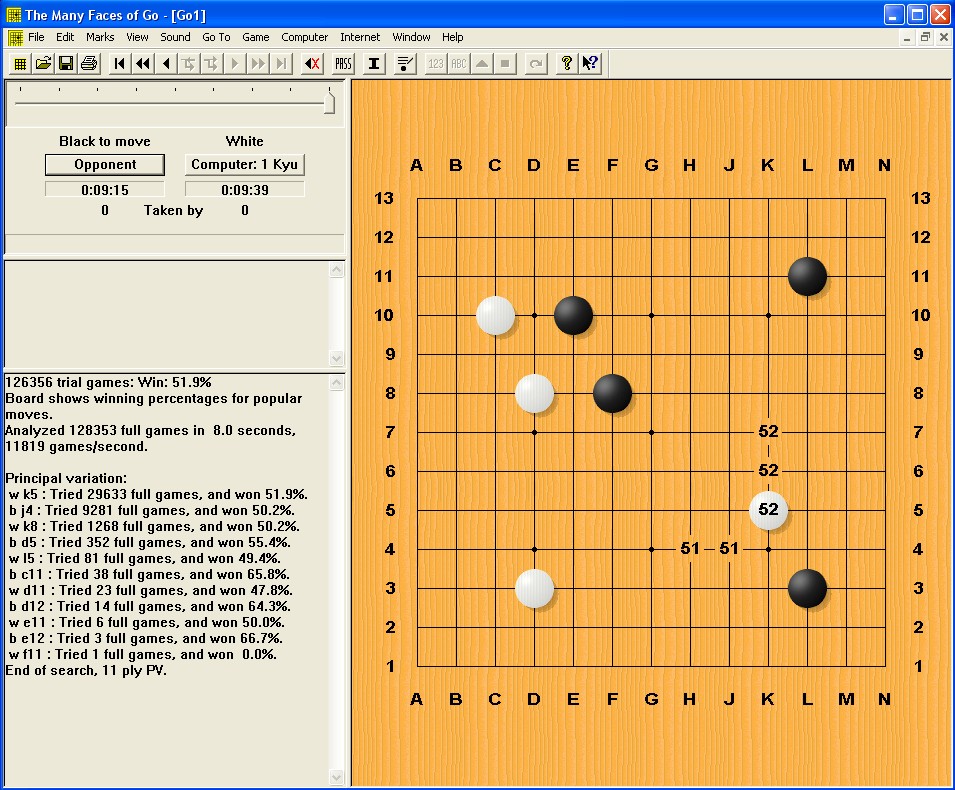 Go program Many Faces of Go, version 12.013 from July 2009 (author David Fotland). This was the first realisation of a multi-best mode for a game playing program that is based on Monte Carlo Tree Search.
The program shows a variable number of "popular" moves. The numbers in the board indicate the candidate moves. The values are the Monte Carlo scores for these moves, rounded to full percent. In the lower left part of the window the principal variation for the best move (k5 in the example) is shown. Typically, only the first 3-5 moves of this line can be "interpreted" seriously. 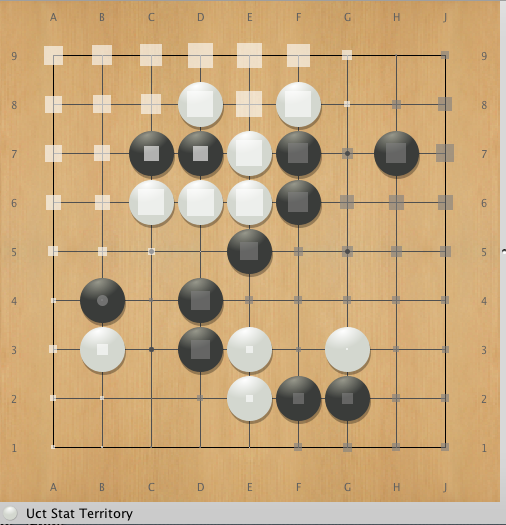 Fuego is a go program, using Monte-Carlo tree search. The initial version of the code was released by the Computer Go Group at the University of Alberta. Fuego is available under the terms of the GNU Lesser General Public License. Members of the Fuego team were (in October 2010): Markus Enzenberger, Martin Müller, Broderick Arneson, Richard Segal, Gerald Tesauro, Arpad Rimmel. In certain periods also David Silver and Aya Huang the Go-programming heros of DeepMind ("Alpha-Go") in 2015 and 2016 were also in this group.

Fuego has a routine that does not show values of moves but how often a square will finally end in the territory of Black and White, respectively. The size of the white and dark grey squares represents the percentage of playouts that ended up with that point being territory for that color. For example, a large white square means that white almost always owned this point, while a small grey square means that black owned it only slightly more often than white. The exact values are scaled from -1 (always white) to +1 (always black).

Jonathan Chetwynd used the Fuego routine to generate another type of colourful pictures showing "expected territory" in go positions. The data describe the probability that either player may gain each point of territory. Reddish color means higher probability for becoming white territory. Green means higher probability for becoming black territory. (This may be a problem for color-blind people.) The data were normalised and converted to two dimensional gradients using linear interpolation or lerp. Scaleable Vector Graphics (SVG) is used to display the combined image in the browser.

K-best search in game trees gives the user not only the single best move, but a list with the k best move candidates. Here "best" is always meant with respect to the evaluation function of the program in use. From the mid 1990's on, several good screen layouts for k-best game tree search have been realized. See the seven examples below. 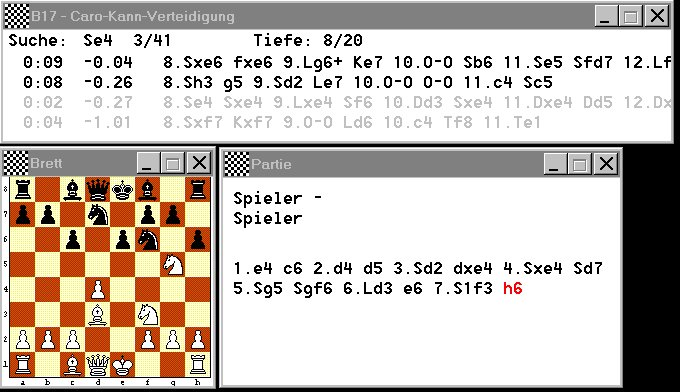 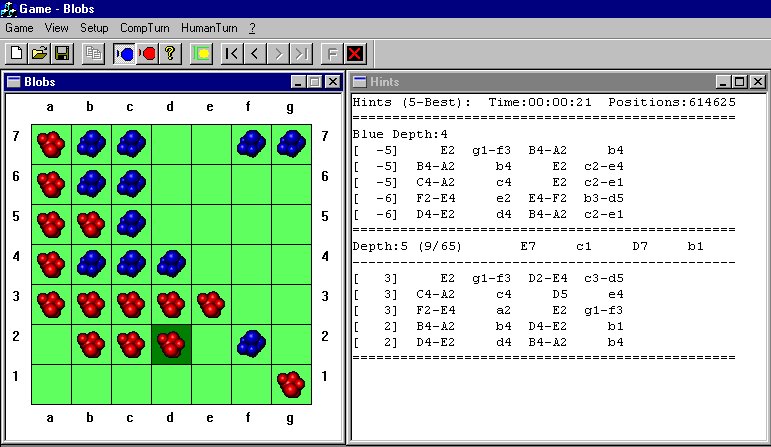 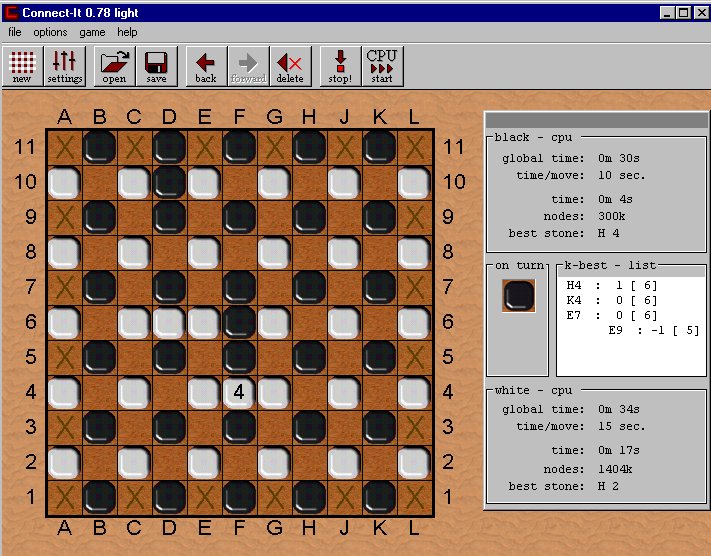 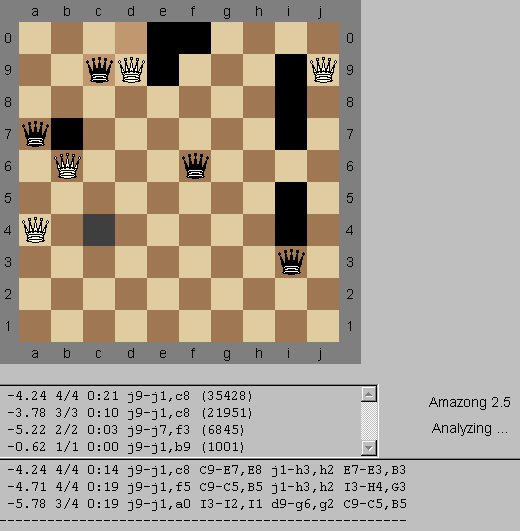 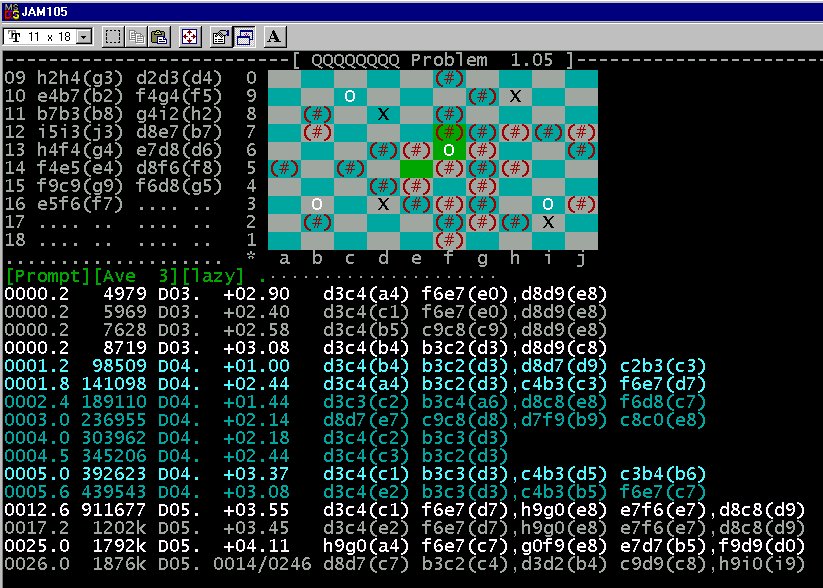 Feel free to contact Ingo Althöfer when you know about other nice realizations of k-best game tree search.