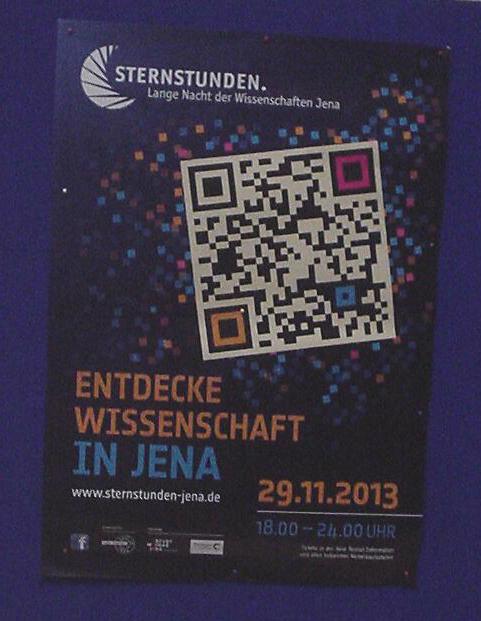 My group at the FSU ("Mathematical Optimization") was involved again, this time with an attempt for a world record: "Deepest Lego Hole".

First of all a clarification: "LEGO" is a trademark of LEGO Juris A/S in Billund, Denmark. Our event and this website are neither sponsored nor authorized nor supported by LEGO Juris.


Everything started almost a year ago. When I saw the website of Lego World Records, in particular those with tallest towers, I got interested. Step by step I learned that these tall objects were not purely LEGO. To put it bluntly: The basic strategy is to design a stable skeleton from steel or some other metal, and then to build Lego bricks around it. I wanted to try a different approach, with Lego bricks only.

The object should be very slim, and there should be nothing hidden inside. From that condition it was only a small step to the concept of a hole. 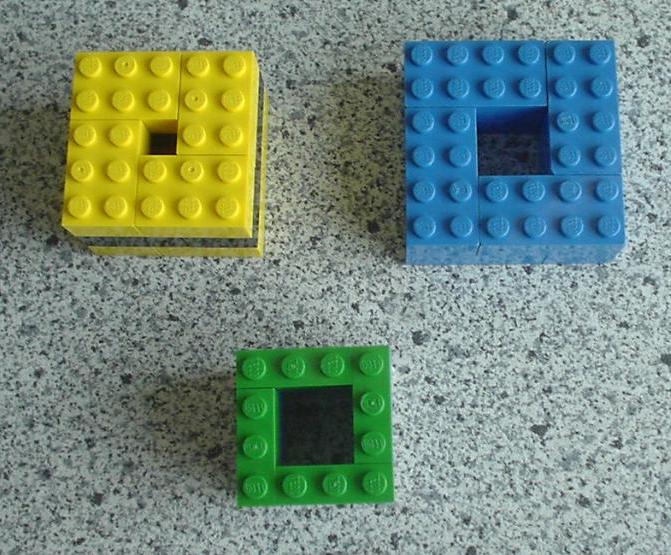 A hole of width 1x1 would have been too narrow for my taste. Another first test with 3x1-bricks and hole width 2x2 went wrong: At a height of about 4 meters the structure started to bulge massively. It did not crash but we had no confidence in realising a height of more than 5 meters this way.

So I "ended" up with the approach that used 4x2 bricks. Old or used bricks often have a reduced clutch power. To be on the safe side, I took only new 4x2 bricks - which resulted in costs of more than 500 Euro.

The hole should be stabilized from outside, as simple as possible. A pragmatic solution is to erect it inside the central eye of a narrow stairwell. This keeps wind and weather out, and the hole can be stabilized cautiously by some "fastening" to the banisters. 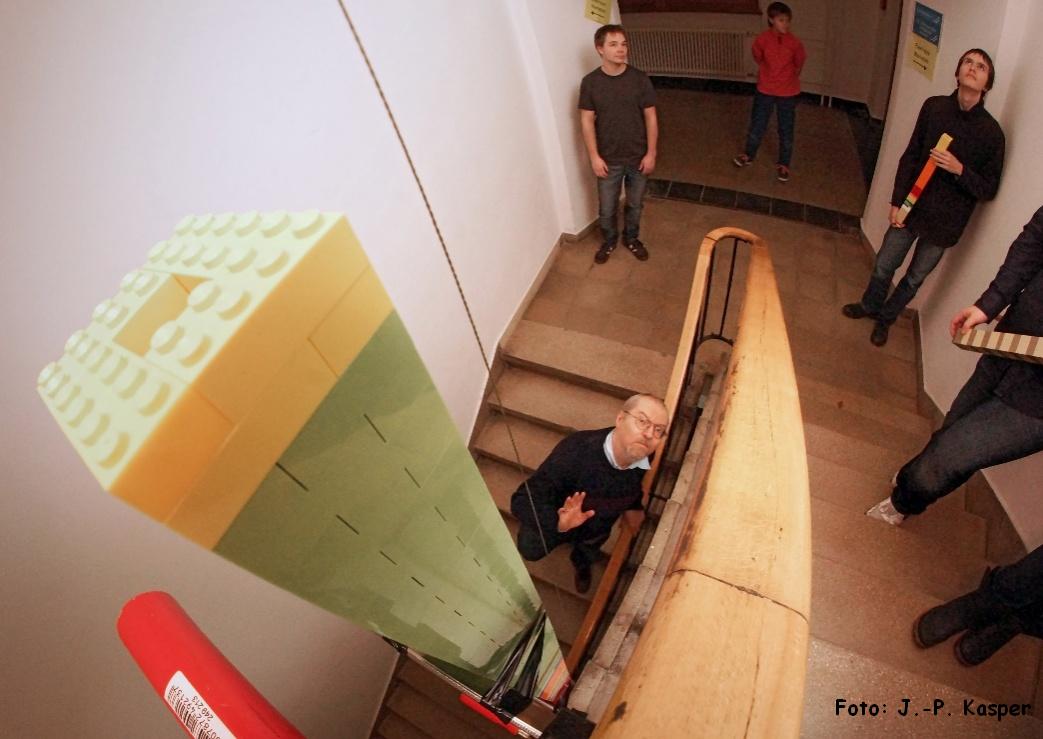 At this moment of this photo the hole was not finished, yet. Anyhow, we had passed already the 10 meter mark. The string of the plummet can be seen which was for our orientiation. You also see two of the twelf clips (with the red grips) fixed at the banisters: they stabilized the hole via black adhesive tape. On the stairs some helping students are waiting with further segments for the Lego hole. We had prepared the segments in the months and weeks before the event; each one consisted of 60 (or 58 or 62) layers of Lego bricks. 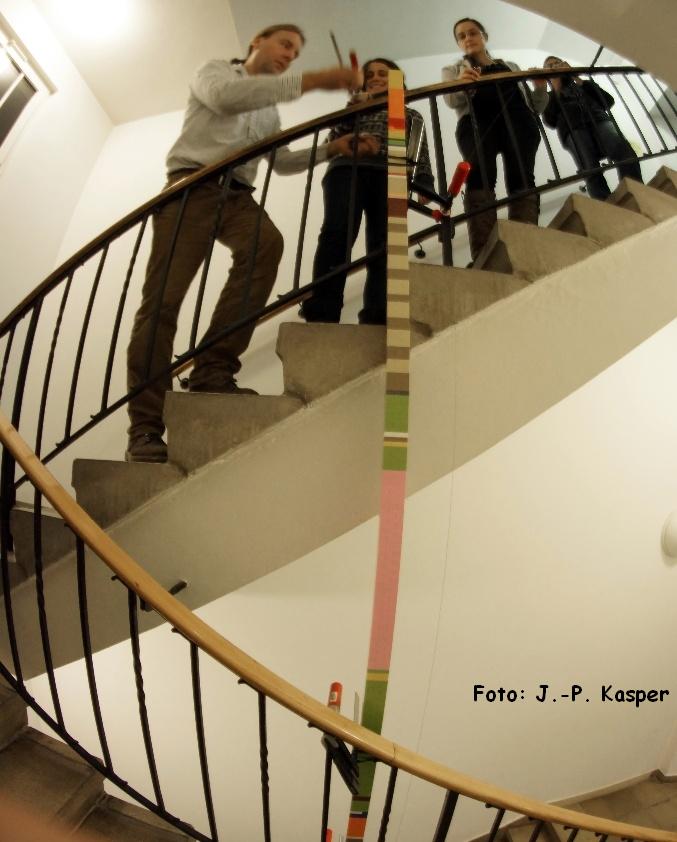 Left in the photo is Dr. Hendrik Wöhl. He is vice director of the scientific laboratories in Physics and contributed crucially to the success of the project. In hindsight it was a lucky aspect that there was no appropriate stairwell in the Mathematics building of the Friedrich Schiller University. With theoreticians alone we would not have been able to realize a hole of 10 meters depth. At the end everything had gone smoothly and looked simple. This fits with the old engineering proverb "Technique in perfection is unobtrusive". 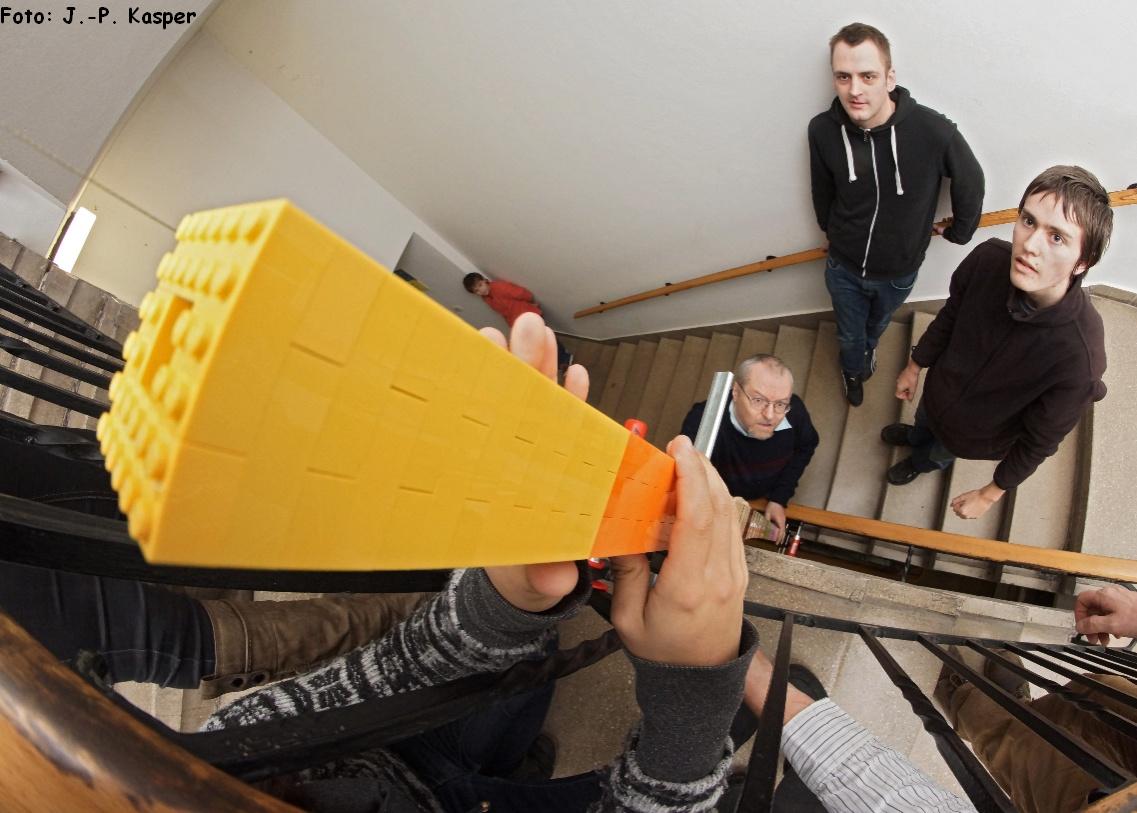 Some helpers are watching anxiously. Will the construction be stable, in particular the final segments? 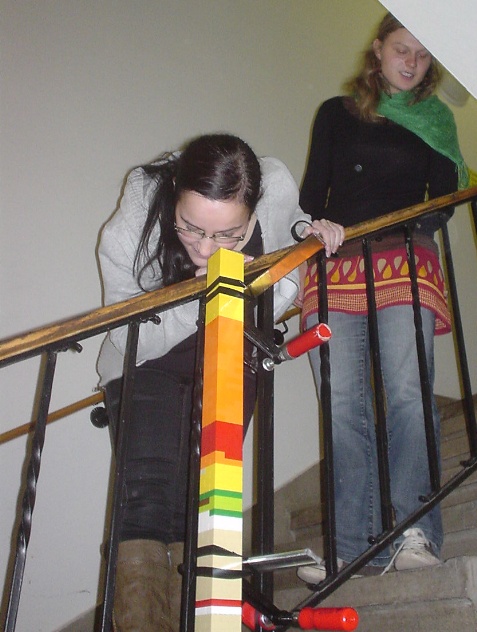 A glimpse down. But the flashlight in the bottom was not visible. (It had been still shining at 6.5 meters.) 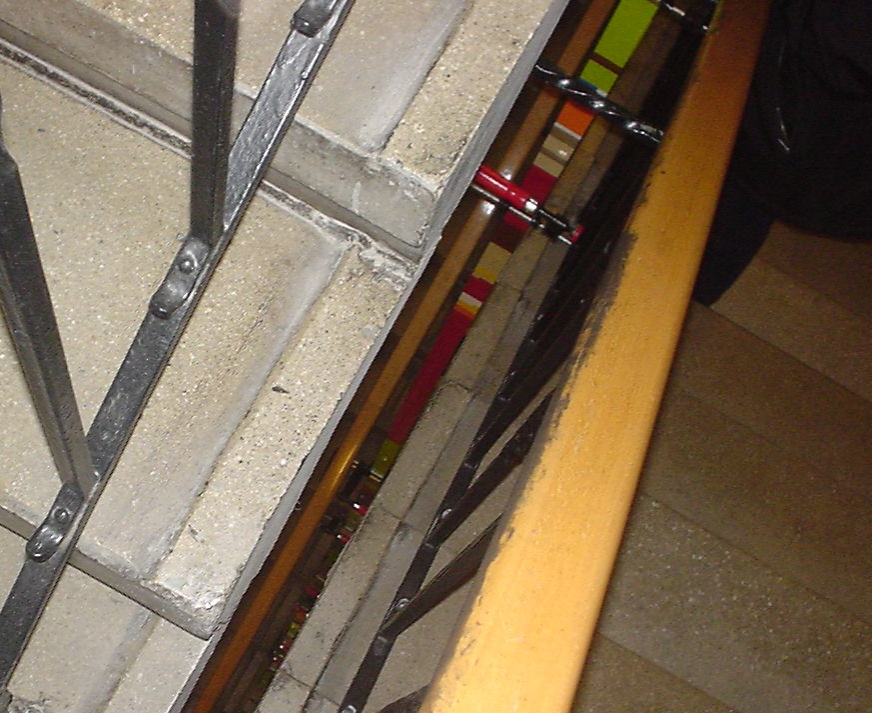 The photo gives an impression of the slim character of the hole. The bottom end can only be guessed in the photo. In total the hole had 1,203 layers of Lego bricks and was 11.56 meters high. 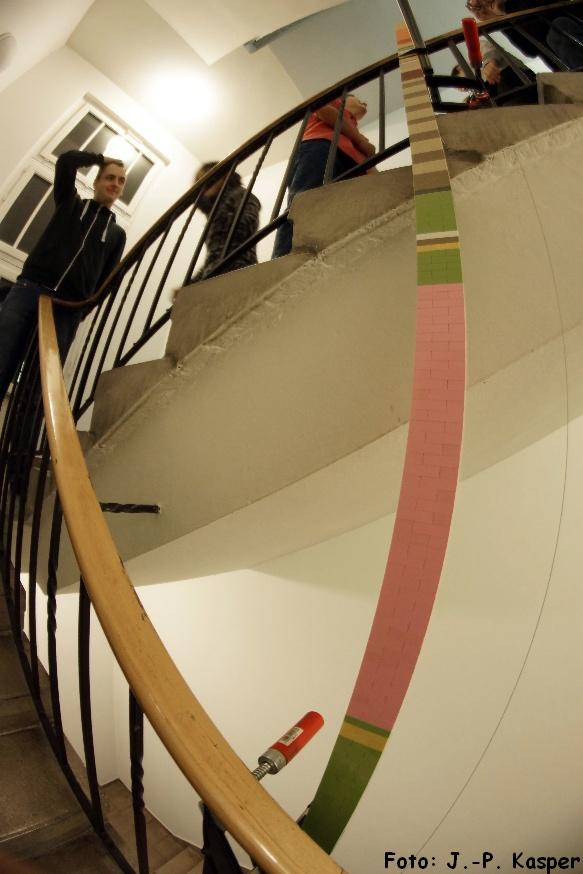 The hole was not exactly vertical - the differences from the production process of Lego bricks are simply not small enough. Lego guarantees a precision of +/- 0.02 millimeters in the height of a new brick with standard height of 9.6 mm. That sounds impressive and is impressive, particularly in comparision with toy bricks from other companies. But over hundreds or thousands of layers small random deviations accumulate, leading to instabilities. The extreme shape in the photo was created by the photographer with a fisheye lens.


And suddenly the spectators flooded us. Officially, the long night was to start at 18:00 h. But there had been press announcements that the Lego hole would stand only until 19:00 h for reasons of safety. So, families, adults, and children conquered our stairwell already around 17:30 h. Just a few minutes before we had completed our construction and the test drops of the ball. 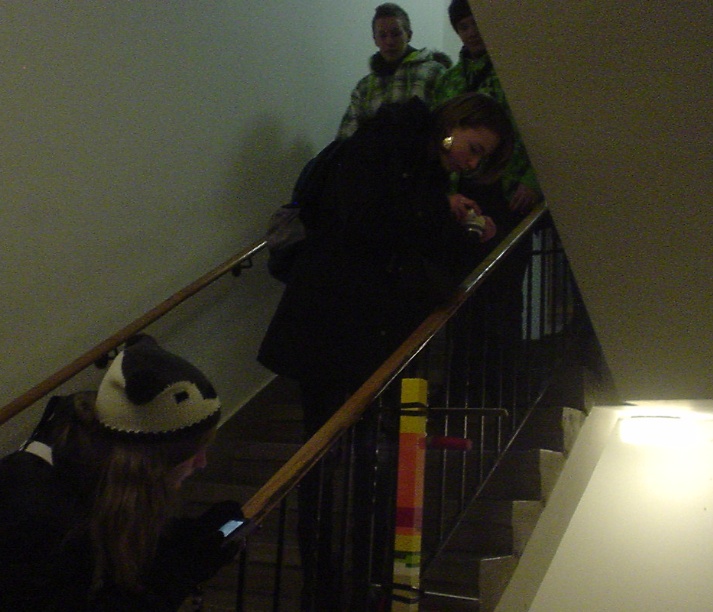 Most of the adults only watched and were amazed. Some people took photos, from top into the stairwell's eye or even directly into the hole. 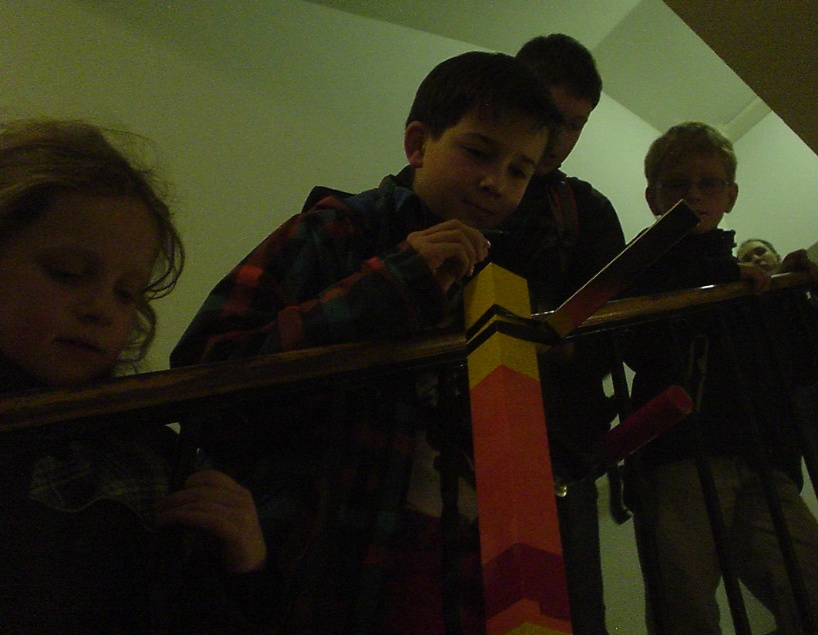 Many children were more active and used the ball of steel. This was about 14 millimeters in diameter and fit easily into the hole with its width of 16 millimeters. The ball fell and fell, but it was no free fall. Typically the ball beat the wall again and again and took in average about 3 seconds for the 11 meters from the start to the entry of the brake chamber. In front of the hole's bottom the next volunteers were waiting already to pick the steel and carry it up the 70 stairs for the next throw-in. Each round was started with a loud announcement: "Acktung, Kugel!".

Many times the ball was thrown in the hole: about 25 trials during the tests at the end of the construction phase; and then more than 100 times by visitors. The whole time, several helpers were distributed all over the stairs. They had to spy for possible instabilities in the hole and had to keep curious visitors from executing unorthodox stability tests. But everything went smoothly. The hole stood stable like a miniature Eiffel tower - without any readjustment during the three hours of its existence. And the spectators were also very disciplined. Motivated by the great crowds and the stable safety situation we did not dismantle the hole at 19:00, but prolonged the exhibition until about 20:30 h. After that, our team was completely exhausted. The dismantling itself took less than 30 minutes. The Lego bricks were not torn into single pieces but in segments of about 60 layers again.

When a massive sphere or ball comes down in a 10+ meter hole it will crash into the ground with a lot of momentum. We wanted to avoid such impacts to save the ground and to prevent the ball from jumping out at the bottom side and getting lost. Therefore, we introduced the following bangbang brake mechanism. 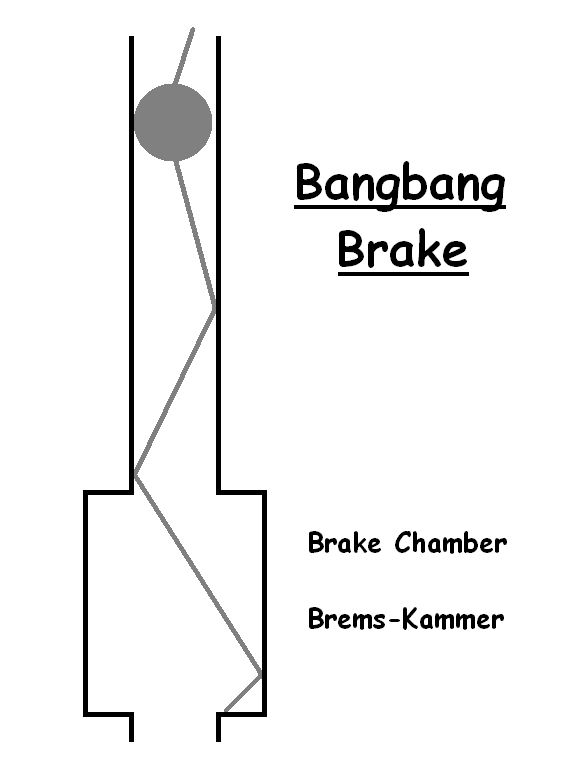 The hole was not one hundred percent vertical and had several small bulges. This meant that the ball typically beat at the inside walls several times during its "journey". About 60 centimeters above ground we had widened the hole, from 2x2 to 4x4 pins. Almost always the ball used the extra space. When the hole narrowed back to 2x2 some 30 centimeters later the still fast ball typically missed this small exit. Instead, it crashed on the edge which reduced its speed to almost zero. Then it slid down in the hole, arriving slowly and without danger at the absolute bottom. Of course, sometimes the ball hit the narrow 2x2-hole directly leading to an impressive impact at the ground. This happened in about five percent of the cases. So, our brake chamber construction was not idiot-safe... 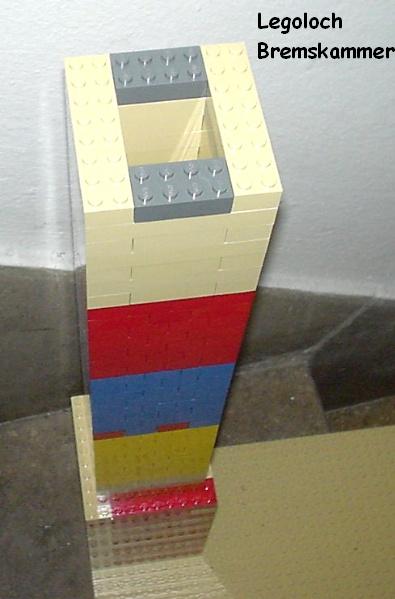 A look into the the brake chamber with its 4x4-width. 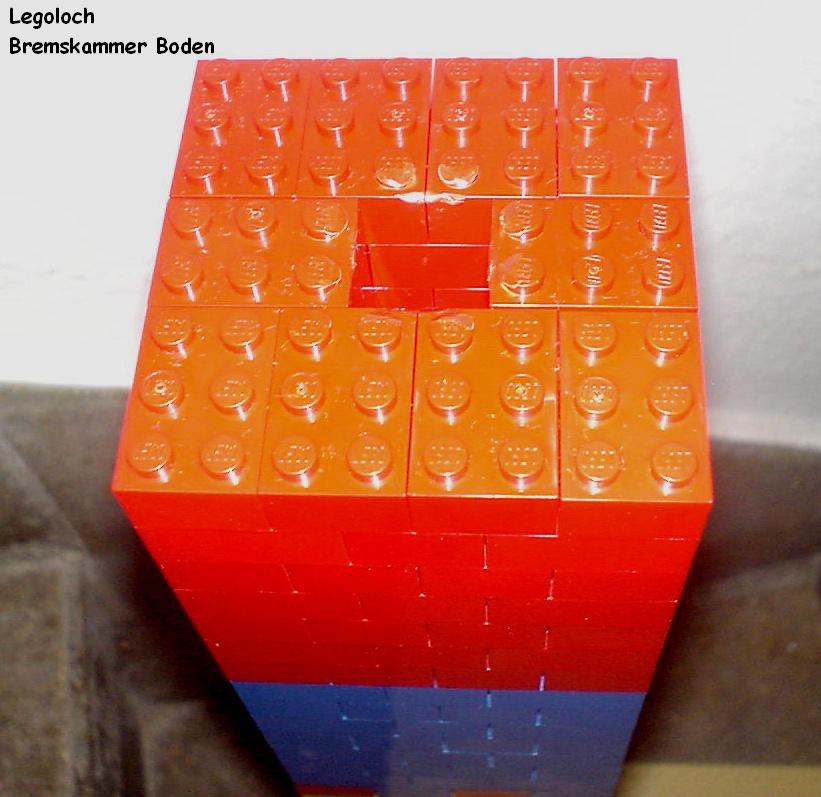 Here you see the ground of the brake chamber with some damage from the impacts. 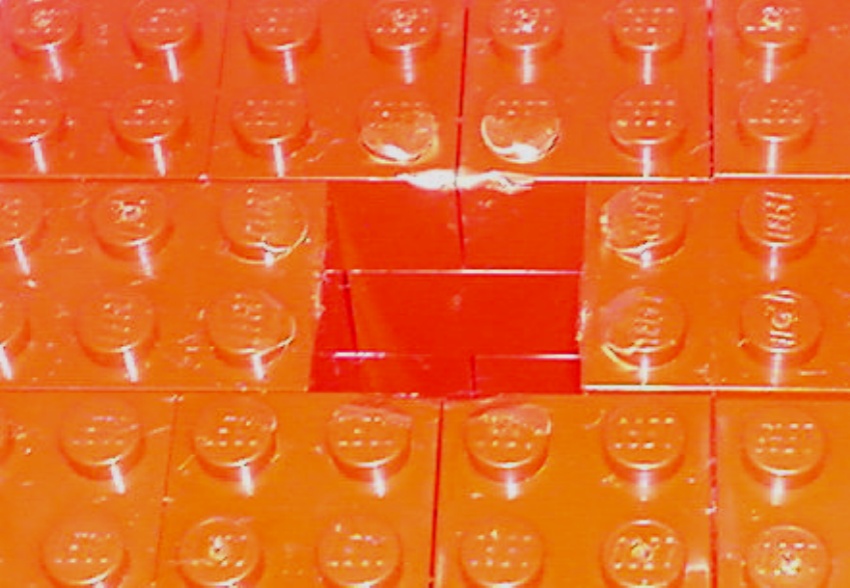 Zoom in on the damaged edges.


* Prof. Ernst Anders
In January 2013 he was my first partner for discussions on deep Lego holes. We lived in the same 9-party house in Jena. My original plan had been to make first tests (planned height slightly less than 7 meters) in the stairwell of our house. For a short period of time I thought him to be a "worrier". But step by step I realized that he had a very realistic view on some crucial points, including the danger of a hole crash.

* Ben(R)
from the German AFoL scene. During a meeting in Summer 2013 we had discussed miscellaneous aspects of high Lego towers and deep holes. Ben introduced the idea to go for an indoor world record (with 40+ meters) of a highest Lego tower within an elevator shaft. The main advantage of such a shaft would be the wind shield. Jena downtown has several tower blocks with appropriate elevator shafts: for instance the round Intershop tower with its more than 100 meters, and directly across the street the JenOptik building B66.

* Prof. Dr. Ralf Laue, Zwickau
He manages the Lego world record lists in the web and gave me some background information.

* Dr. Andreas Winnefeld und Dr. Hendrik Wöhl
They belong to the scientific laboratories of the department of Physics, Astronomy, and Technics of Friedrich Schiller University. Director Winnefeld gave green light for the project in general and proposed the "proper" stairwell. Vice director Wöhl was a very competent helper during the setup, also in two technical rehearsals. In the first one, at the end of October, almost nothing worked. But in hindsight that was good; from the faults we got many hints for the great event. In the final rehearsal, nine days before the long night, we achieved already a hole of 10.4 meters.

* Prof. Birgitta König-Riess
She was the dean of our department for Mathematics and Computer Science. During smalltalk two days before the event she saw through central aspects of the project within a few seconds. As I explained that many high Lego towers had been stable only by steel skeletons her very direct question was: "And what is your trick?"

* A few months before the long night a structural engineer from Leipzig with a "major in Lego" had guessed that the stability of a deep Lego hole would not be a problem. His prognosis turned out to be not appropriate, luckily already in the first rehearsal in October. So, we had enough time for modifying plans.

Our hole is now in the list of LEGO World Records. Its position in the list is proper for a hole, namely almost at the bottom.
I am eager, if or when other groups will surpass the depth of our Lego hole. One hint: Include rehearsals in your schedule. They will improve the chances for a smooth main event.